A procedure applies to a process with a long tradition of media art.
The Fantastic in the digitalis the explicit subject.

From the opening speech in the written text:

The Fantastic in the digital age with explanations of variations of the same basic motif:

The animal Fanta - Abbreviation for fantasy animal - is the basic theme. It may, in its form, changed its surface structure and also in color, depending on what environment or world, it is staying.

His original version is the Fanta animal on the picture (No. 1 gallery) with August Rodin's Gates of Hell. The sculpture stands in the gate next to the Kunsthalle Zurich. Up on the Gates of Hell, you can see the sculpture of the thinker, which is also situated next to the Kunsthalle in Bielefeld. The Fanta animal is magically drawn from the Gates of Hell and is under the spell of the Gates of Hell. Its surface structure has adapted quite the surface design of Hell formal. It also throws a shadow like a real living beings in the real world. It exists in the real world! The presentation is called "digital installation".

The Fanta animal environment can be completely changed with the help of computers and software to a very different picture (No.55) results: The image "fairy tale" is mirrored by the doubling-described picture emerged. Thus, from the exterior and the interior of an animal Fanta increased in width and is now head towards the viewer. It is believed to see a hermit in his library.

If we add the color, the pictorial is in a markedly different world (No. 3). Again, seek the Fanta animal to the Gates of Hell, but a lizard Fanta has joined them and comes running up to the viewer vigorously. The color emphasizes the fairy tale world.

Two other images belong to the fairy tale world. The "Rondo" (No. 4) shows a framed portrait of the Fanta animal that has a castle make for a portrait gallery of ancestors in the fairy tale castle.

In the "fairy tale review" (No. 5) the Fanta animal has asked it's friends, to dance to celebrate the exhibition opening a revue.

The chameleon effect is particularly relevant in the picture "Digital Encounter" (No. 7) (see attached picture) a role. This time, the Fanta animal had received from the image with the Gates of Hell, a different surface structure, which looks like made of curved neon tubes. This is plain from the Fanta animal care has become an electronic marvel. It is now running with the Swiss Federal Railways and met a Swiss businessman. He is confused whether the encounter and let the cigarette fall fast. The picture is called "Digital encounter" because the two could only meet in the digital age with the help of the computer. Before digitization, the encounter was not possible.

This is a true story that actually happened in slightly different form: a Swiss businessman, a banker, has discovered the Internet on my homepage my Fanta animals and we have come in business. This is the Fantastic in the digital age. 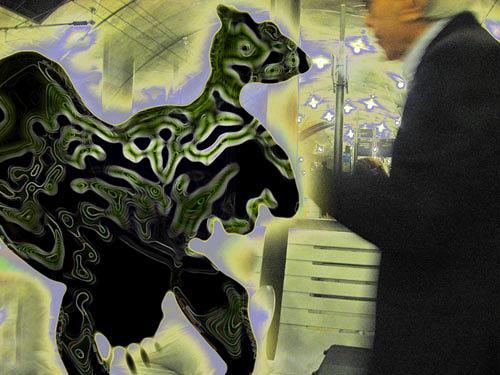